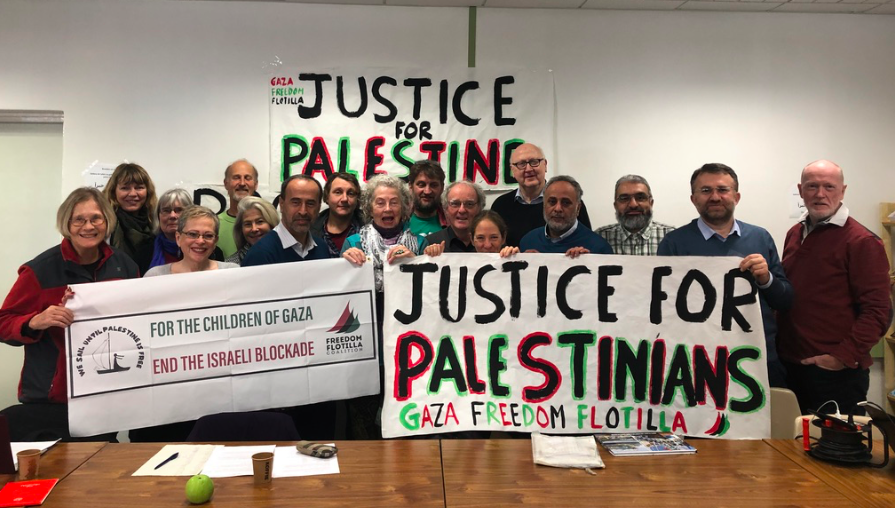 After joining other civil society organizations in The Hague on Friday November 29 calling on the International Criminal Court to take action and prosecute Israeli crimes against Palestinians, the Freedom Flotilla Coalition met in Rotterdam this weekend to plan our May 2020 sailing towards Gaza with these important goals:

For more than five years the UN Conference on Trade and Development (UNCTAD) has been warning the world that Gaza will become uninhabitable by 2020 if the blockade does not end. Basic human rights of Palestinians in Gaza are violated daily by the Israeli-imposed blockade, including the right to adequate housing, the right to education, the right to healthcare, the right to clean water and food, and in particular the right to freedom of movement.

Civil society organizations from around the world have combined to challenge the blockade since 2008, when Free Gaza boats managed to arrive in Gaza and leave again peacefully. In all, more than 35 boats have sailed to challenge the blockade in all. Since 2010 we have sailed as the Freedom Flotilla Coalition: international civil society organizations united for human rights and dedicated to challenging the blockade of Gaza through nonviolent direct action. May 2020 will mark 10 years since the attack by Israeli forces on boats including the Mavi Marmara, where they killed 10 people and seriously wounded 56 others.

“The children of Gaza deserve the same rights as children in every other country of the world,” comments Ann Wright of the US Boat to Gaza. “They are more than a million, more than half of the population of Gaza, and they are being deprived of the right to a just future because of the illegal blockade and ongoing military attacks on occupied Gaza by Israel, with the complicity of our governments.”

The Freedom Flotilla Coalition calls on people of conscience from around the world to support our May 2020 mission for the children of Gaza.

Freedom Flotilla Coalition members also held protests in front of the International Criminal Court to highlight the case in front of the court about the killing of civilians by the Israeli military in international waters in 2010.  At that time the Israeli military boarded the Mavi Marmara and other ships in the flotilla and commandeered them to Israel.  They also killed and wounded passengers.