Join us Sunday April 3 at noon ET to hear about indigenous peoples in British Columbia and Palestine and how history, culture and needs of the i

ndigenous people take a back seat to the land’s resources for colonizers.  More information at: https://mideastcrisis2.blogspot.com/2022/03/zoom-panel-on-holding-our-ground.html.

Congratulations to Miles of Smiles and MEDICs Worldwide on such a monumental task of outfitting 37 ambulances and getting them across the Sinai, through the Rafah border crossing…and finally into Gaza!!!

We are so glad our US Boats to Gaza and other FFC national campaigns were a part of this!!

Thank you to all who contributed to this important effort!

Following are webinars on a variety of topics on Palestine:

Webinar entitled “How to have conversations on Israel” held on April 1, 2021

Following are some recent webinars with guests from Gaza and about Gaza.

May 30: Webinar with Cultures of Resistance Films direc 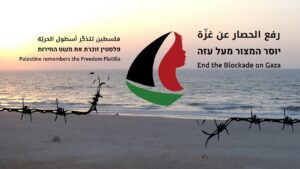 May 30: Held in the Palestinian ports of Acre and Jaffa with on line panelists who sailed in the past to challenge the blockade as well as various artists and a Palestinian from Gaza, this event in 1948 Palestine commemorated the 10th anniversary of the attack on the Freedom Flotilla and called for the lifting of the blockade on Gaza. Watch on Facebook

May 28: A distinguished panel of international lawyers discuss national and international legal actions against the Israeli occupation, from the Gaza Freedom Flotillas to Annexation, 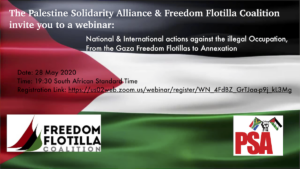 May 23: Award-winning film The Truth: Lost at Sea, followed by a discussion with film-maker and Mavi Marmara survivor Rifat Audeh and other Freedom Flotilla participants. Hosted by Canadian Boat to Gaza.

Other international Freedom Flotilla Coalition member events can be found at: https://freedomflotilla.org/flotilla-informational-events/

COVID-19 IN PALESTINE: Please consider donating to one of the urgent response appeals for healthcare in Palestine, either through UNRWA: https://donate.unrwa.org/covid-19/~my-donation, or through Medical Aid to Palestinians https://www.map.org.uk/donate/donation-details/224, or the Middle East Children’s Alliance: https://www.mecaforpeace.org/

Join us on Saturday, May 9, (10 am North American West Coast, 12h00pm Central, 13h00 Eastern, 18h00 England, 19h00 France and 20h00 Greece/Gaza).  The idea of sailing to break the Israeli naval blockade began in 2008 with a group called Free Gaza Movement. Their story of the challenges of actually getting boats into Gaza, the first boats in 41 years to arrive in the Gaza City port, the only port Palestine has, is remarkable.

We will hear from the founding members of the Free Gaza Movement, Greta Berlin, Paul Larudee, Mary Hughes-Thompson, Vangelis Pissias, and Musheir El Farra about the challenges of fundraising and organizing the first two boats to reach the shores of Gaza and see photos of the outpouring of goodwill from Gazans as the boats arrived in Gaza in 2008. We will show the trailer of a new movie “Rock the Boat” of the 2008 flotilla by directed by Kathy Sheetz.

Please register to receive the link for the seminar and read more about the webinar panelists.

This is a part of a webinar series that the Gaza freedom Flotilla coalition is sponsoring to bring International attention to the plight of Palestinians from the brutality of the Israeli government and military with the land sea and air  blockade of Gaza and the theft of Palestinian lands.

See the film about the Free Gaza movement To Gaza With Love:

It took amazing people to creat the Free Gaza Movement.  One of them, Mary Hughes Thompson, passed away on February 5, 2021.  Read about her life of courage, determination, and joy at: https://www.freegaza.org/In-Honor-of-my-Friend/

Gaza Fights For Freedom webinar.  On March 28, 2020, Canadian Boat to Gaza and others hosted this movie and discussion with filmmaker Abby Martin and Raed Schakshak from We Are Not Numbers.  On April 25, 2020 a similar webinar was held for Asia and those on other time zones.

As the world faces the Covid-19 epidemic our hearts go out to the people of Gaza where the virus has now appeared.  Gaza is an even more dangerous place for the Corona virus outbreak with a health care system that is hampered by the illegal blockade, with a population forced to live in close quarters due to restricted movement and being denied their right to return home, and the water being unfit for consumption.  In solidarity with the people of Gaza, we are organizing events:

And please remember to donate to the various organizations that are helping Gaza through the Corona crisis and in the long term including the UN Works and Relief Agency, Rebuilding Alliance, and Middle East Children’s Alliance.